Monday 6th June - With having five children under 4 on this holiday one of the main differences (in comparison to previous holidays) is that is seems to be less of an issue to get everyone up and out of the house ﻿- because they get us up much earlier than we would choose to, left to our own devices!
So by 9:30 we were all on our way to Lincoln.

We did some shopping; wool for me,  cars for the boys and two quarters of chewy nuts from two different traditional sweet shops for Nathan. 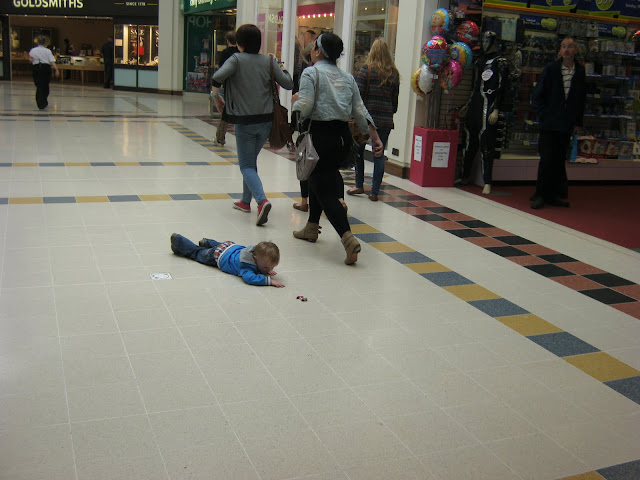 Joseph playing with his new car on the slippy surface of the shopping centre!

We walked up the steep hill (aptly named as it was indeed very steep) to the cathedral. 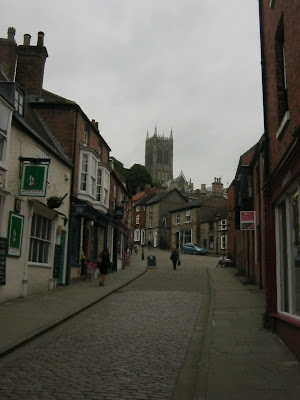 The lower lesser steep part of the steep hill!﻿

Very impressive though it appears it is not the largest cathedral in Europe as I confidently told people, but in fact only the third largest in Britain!! (Don't know where I got that wrong fact from!!) 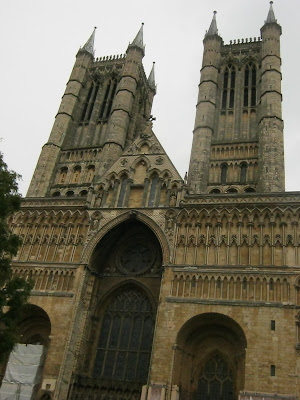 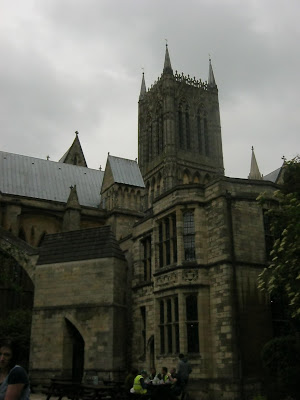 We had a picnic courtesy of 'Boots Meal Deal' and then went to find the 'restrooms/toilets/loos/crappers' (Another slight difference on this holiday - with two toilet trained children you need to keep an eye for where public convinences are on hand) fortunatley these were much superior to the trauma of Lincoln bus station WCs - enough said on that matter!! 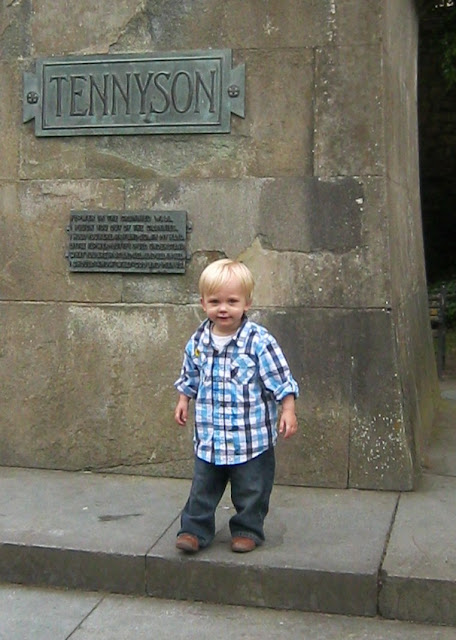 Ben by the statue of Tennyson where we had our picnic 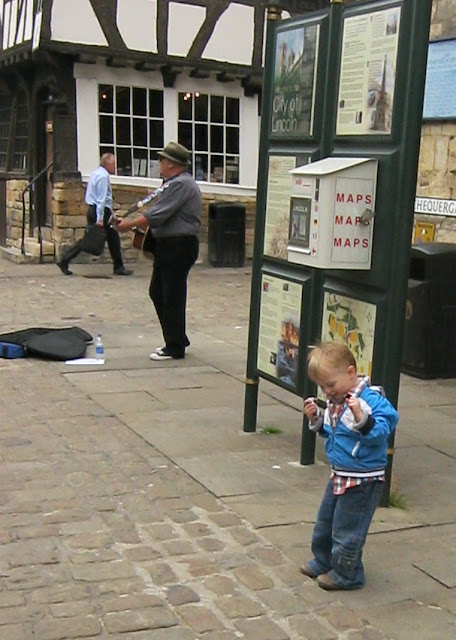 Joseph having a little dance to the Busker's tunes

The boys then went off to play golf and we girls did a little more shopping then headed 'home' via Grantham Asda ( quite a lengthy via!!). Granne got the sticker pictures out for Joseph and Emily and Sarah brought out the hoppers. 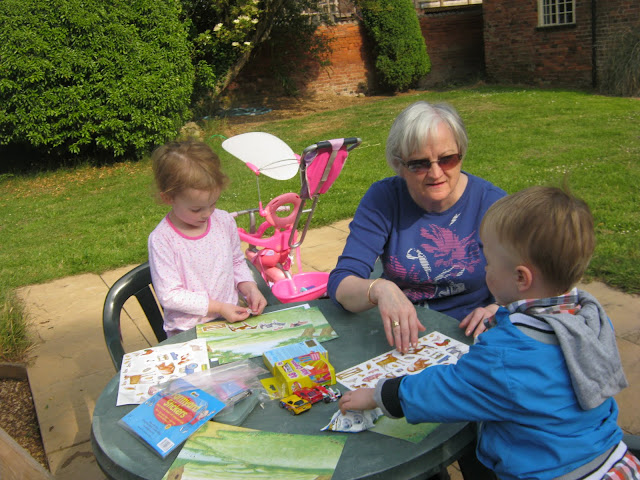 Aunty Gemma and Aunty Caroline made tea of Pizza and salad with cherry pie to finish off.

Main highlight of the day was whilst Emily and Joseph were playing with his cars, Emily asked - 'Joseph am I your best friend?' To which he replied within ear shot - 'No, my mummy's my best friend.' Total heart warming moment - everyone awwed and he ran up to me with a big grin on his face and gave me a lovely hug. 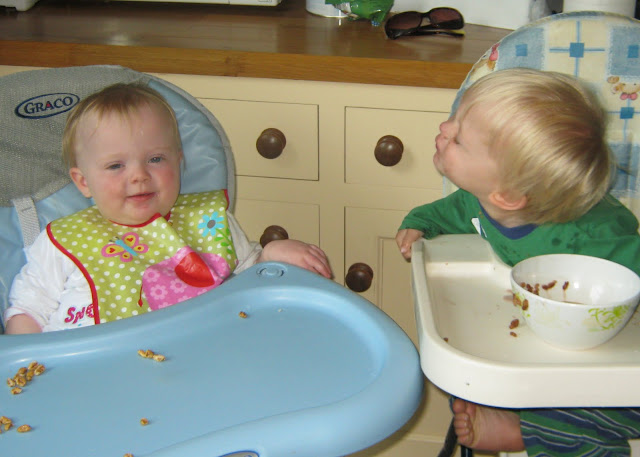 To Skegness we went. Uncle David with his ever at hand iphone 4, with its many apps found us the cheapest carpark. All packed up like donkeys, we wandered down to the beach. Joseph loves the beach, he spent the first 10 minutes running around and diving on the sand and kissing it - something he has been known to do before (no idea why?). He got into his swimsuit and headed for sea, Ben again was not too interested in the water - too cold, though Jack did and Emily too. 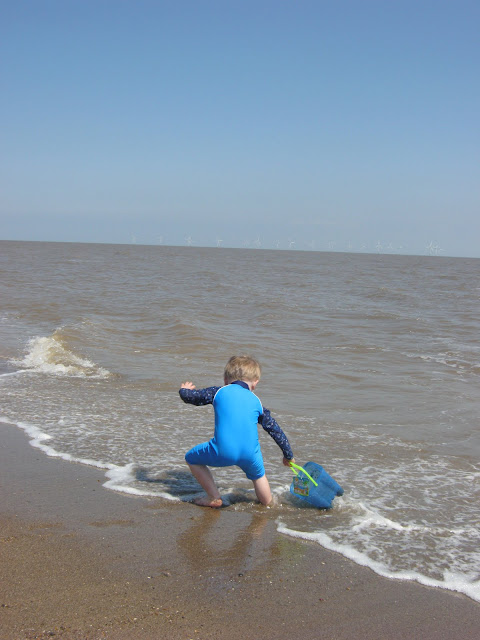 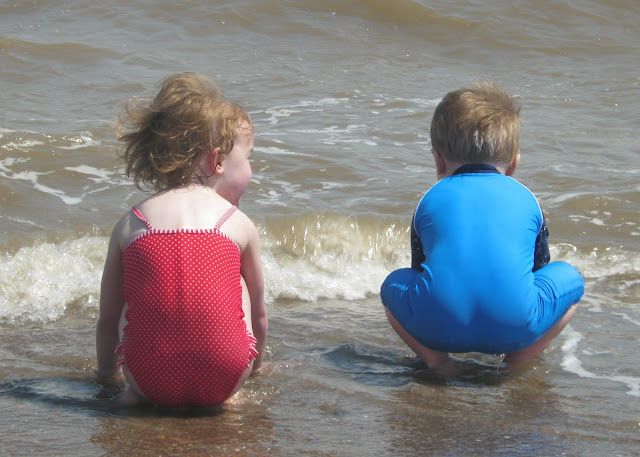 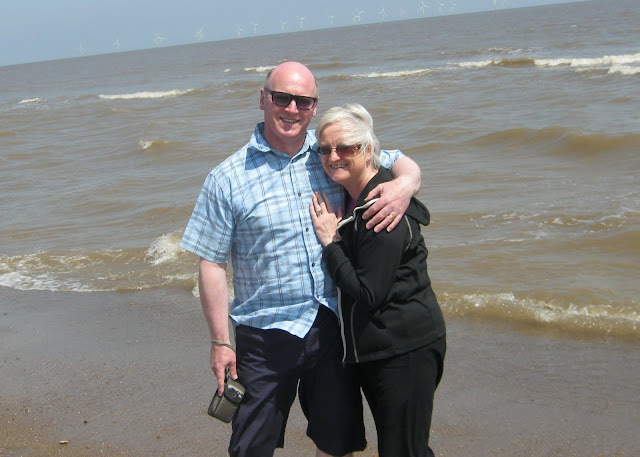 We had a picnic lunch, some played boules, some attempted sandcastles, Ben went into diving on the sand mode! 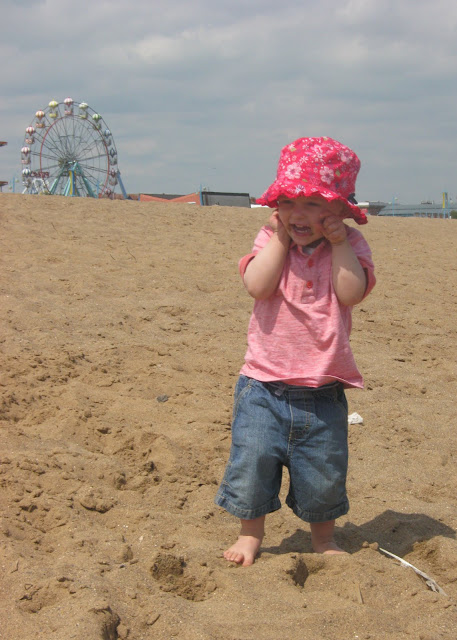 Ben wearing Isabelle's hat - won't wear his own (De-ja-vu of Joseph's 2nd birthday at the beach where he and Emily swapped hats!)

When getting ready to pack up after a couple of hours Joseph got stung by a bee right under his arm. He was really very brave and just wanted me to kiss it better and demanded through sobs 'no plaster'. Aunty Sarah of course had the calpol and Emily just wanted to make him feel better too - she shouted at the bee to 'go away, we're not your friend'

Then he lost one of the two planes bought yesterday, in the sand. Nathan told him to say a prayer to Heavenly father that he would help us find it. So he did and minutes later Nathan found the plane hidden under the sand. Calmed down and plane found, we went for ice-cream at the bargain ice cream house: 50p for a single cone, £1 for a double, £1.60 for belgian waffle and ice cream £1.50 for 4 doughnuts and ice-cream - I had the waffle and Nathan had .... a Fab?! 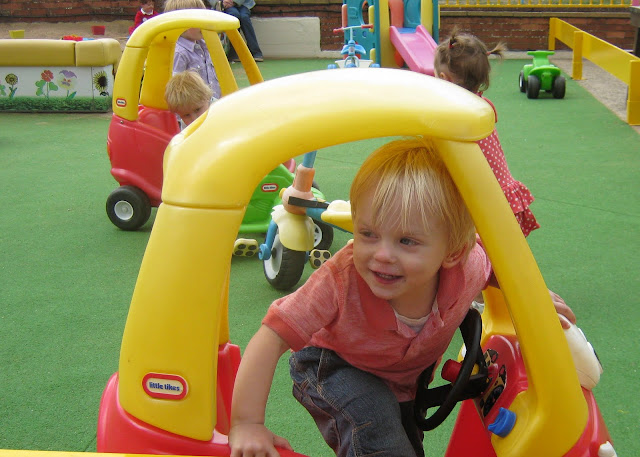 We then took the boys with Granne,Grandad and Emily to an outdoor play park with a huge inflatable slide, bouncey castles, swings, sand pit and Little Tyke cars. So it's no surprise that for the hour we were there that Ben did little more than sit still in one of the Little Tykes cars (£4.50 to pay for him to sit still??!)At one point when there were two available he played a game of running from one to the other almost like a game of dare - Can I get there before someone else does? 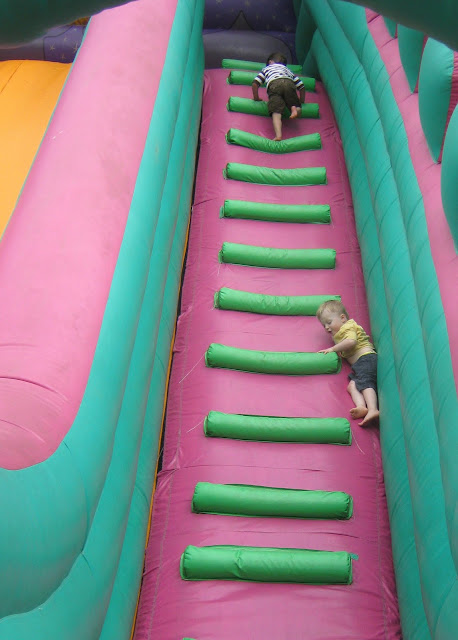 Emily was a little action girl and away
down the huge slide. Joseph went down once and decided he didn't like it but would climb up to the top, then change his mind and try to climb down the stairs getting in the way of the other children climbing up!

Nathan later on managed to convince Joseph that if he went down the slide it wouldn't rain - well that was it he was up and down that slide and up and down and so on until we had to leave. (And somehow it did not rain!) 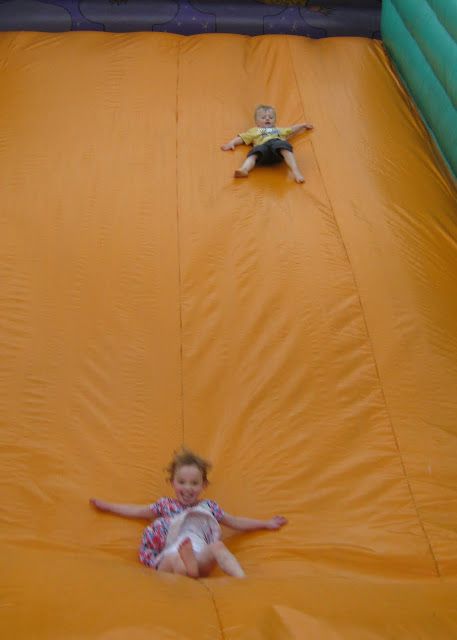 A bit more shopping - posh frocks for mum, bargain jumper for a craft project for me and sunglasses for Nathan. The recommended place for Fisn n Chips being closed we settled for bargain fish n chips at £3 - it was obviously some sort of theme for the day - Skegness a place of bargains!

A great day, though the 10 minute nap the boys had late on into the journey home meant they were hard work to settle to bed. Nathan took on the task so I could go start knitting with the girls. I cast on 100 stitches to find that the needles were too long. I gave up for the evening and went to bed!