The thursday before Good Friday, the children broke up from school. We had a quick tea, then at 6:30 we set off on adventure! It was something I wanted to do last year but being in the zombie-state of early pregnancy, I just couldn't hack a late night.  This year inspite of the unusal snow which had affected large parts of Yorkshire with snow drifts like I'd never seen, I was determined that we would go as a family to 'Lambing Live.'

It takes place one night a year at Cannon Hall Farm in Barnsley - can I just point out - who knew Barnsley was so close????? It took 50 minutes to get there, less time that it takes to get to Mum and Dad's?! I think I just have the feeling that going south is a lot further than going west, north, or east for that matter. Anyway back to the matter in hand. One night a year the farm stays open all night so people can come to the farm and hopefully see lambs being born during the night.

On the way there the thought of - do my boys really want to see how lambs actually come into the world did cross my mind! But then they have seen it before when I took them to the farm in North Milford and a couple of lambs were born then - one of which had to be swung from side to side to help it breath. There is just something magical about spring and lambs which I love. God's creative powers on show - I love it and hope that our boys will also grow to love the wonders of the world on their doorstep. 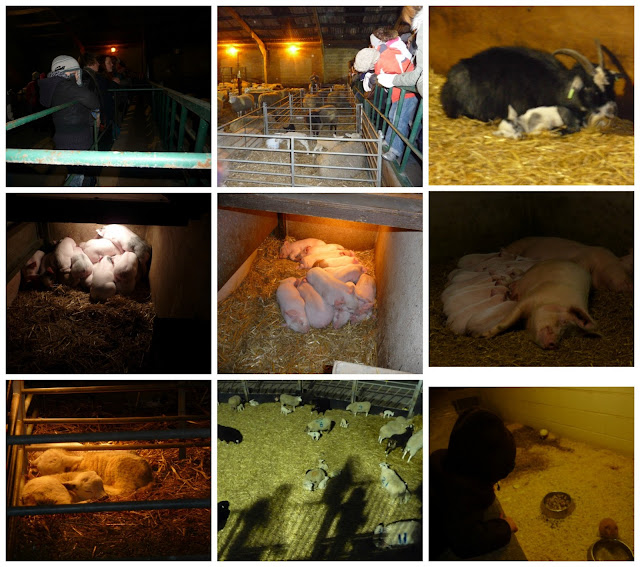 It was really quite busy, dark and  a chill in the air. There was a large shed where the expectant ewes were assembled and a crowd of people watching in anticipation - quite random if you think about it!!! The boys weren't into playing the waiting game, they wanted to explore. We 'ahhed' at the one day old kid and the few hours old lambs which were huddled together to keep warm. The piglets were really cute snuggled up and clambering over each other to get to the warmest spots.There is something about them which is quite human baby like all pink and wriggly! The animals were my favourite part but for the boys it was playing in the snow covered parks at 10 o' clock at night!! Ben led the way in his dare devil style up and down the big slides. Joseph was a little hesitant after his slide accident the day Seth was born, but came down when Ben went with him. They pretended the see-saw was a Star Wars  rider. There was a small fall from a ladder caught on camera and a moment of madness when I hoisted Ben onto the zip-wire and Nathan stopped him from falling off head first (Must be obedient to signs which state that rides are for over 6's, they're there for a reason!) but they came away unscathed - a blessing of prayers for safety I'm sure. We had hot chocolate in the tea room (which also stays open all night too_ then back to check out the birthing shed!!!
It was a lovely night though by the time we left, at 11:00, Ben was asking to go home! I'd like to make this a family spring tradition where we gradually go later and later  and hopefully see some lambs being born in the dead of night. 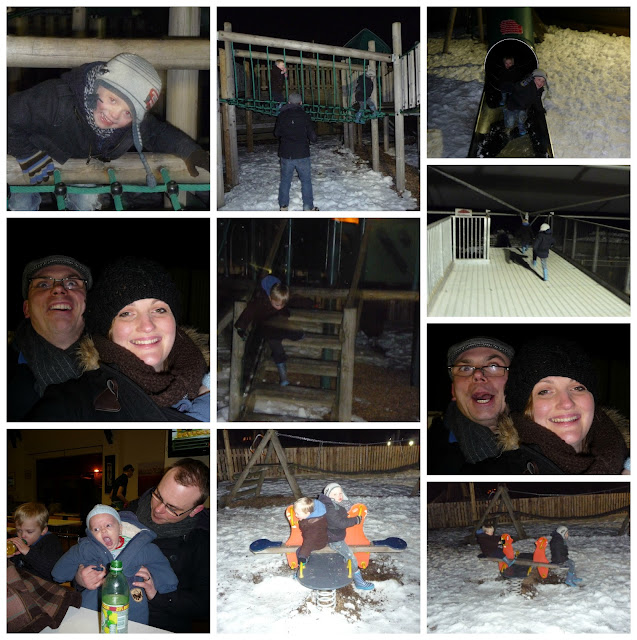 Nothing quite cracks Nathan up more than pulling crazy faces for 'couple ' photographs!!!
Posted by Aimingforswanlike at 09:53