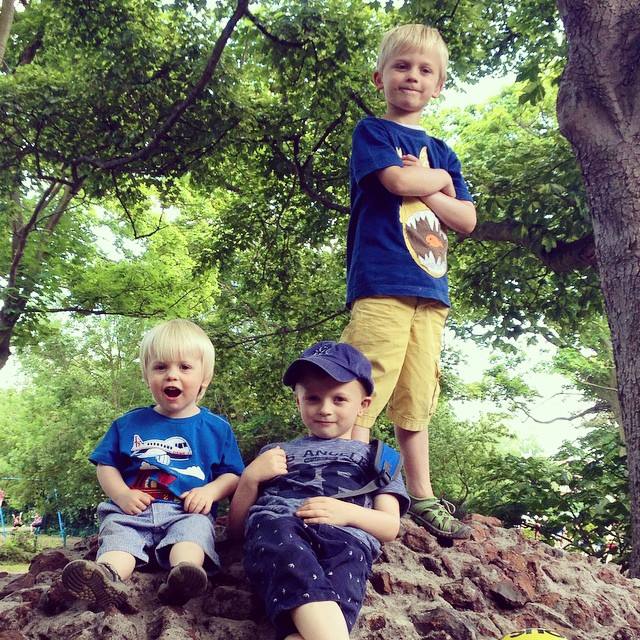 We had a lovely few hours at East Park in Hull yesterday. The boys enjoyed playing in the park and made friends with another couple of boys sharing footballs, Seth very much in the thick of it. There was the episode of the ball getting stuck in a tree, then many a missed attempt at throwing up a shoe to hit it out, only for a shoe twice to be stuck in the tree as well!! East Park has a small but free animal kingdom with; snakes, goats, wallabies, miniature ponies, nosey sheep, deer ( which Joseph was adiment  were Okipi??? Apparently this type of deer are a stage on Sumdog??) alpacas and a variety of birds including peacocks. Unfortunately the water area is now closed but the boys were appeased with the Kyber Pass with its manmade rock formations perfect for climbing,hiding behind and making one mum feel rather anxious about the numerous 'what if' scenarios it presented. Anyway we came a way unscathed fortunately, and then went to collect Daddy who was visiting a friend nearby. We then got to go out on a date to see Jurassic World which was extremely jumpy and my coping mechanisms (clapping, smacking Nathan on the arm and talking to myself) for such were apparently dramatic, loud, funny and might I add totally called for!! The boys had a great time having a BBQ with the trusty clan of babysitters (G&G,AA,AA & UJ) The had a bike ride to the park and watched half a DVD and to say we left them at already 7 o' clock it is no wonder they were extremely grumpy at church this morning. Worth it though!
Posted by Aimingforswanlike at 12:05