Ben had a birthday shout hooray....

we want to sing to him today,
One year older and wiser too
Happy Birthday to you.'

Ben had a great birthday. Great gifts: a scooter and helmet, disney cars ( a staple gift for our boys), duplo sets, clothes, insect collecting set ( Aunty Gemma and I were on the same wavelength there as I went and got the boys one this week too, now they don't have to share) and lots of lovely books.

In the morning, we took them to see Chpimunks: Chipwrecked which they enjoy and we as doting parents endured :) Then in the afternoon we went to Tropical world at Roundhay. The Family McNee came and Granne, Grandad, Aunty Gemma, Uncle David, Jack and Charlie too. 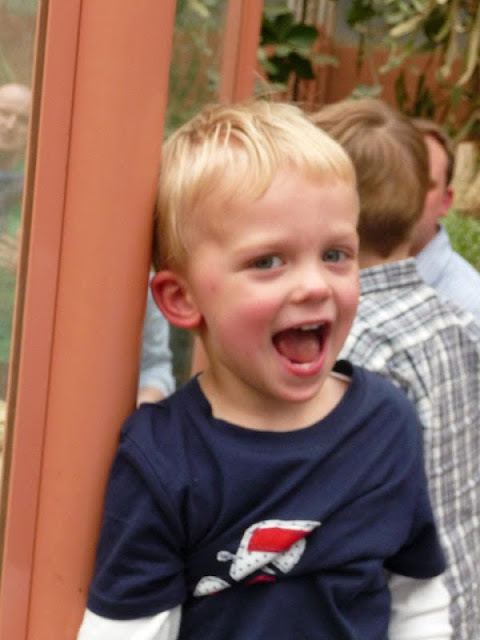 The boys loved wandering/rushing around the animal houses swinging from one relative to the next at will, each taking turns to chase after them as they could weave in and out of legs :) The Meerkats were the favourite sight, especially as there were 4 baby kits(?) Joseph didn't want to see the crocodiles or the snakes and covered his eyes, though he liked the Tree shrews, oh and of course the gift shop where he begged for a tiny plastic crocodile :) 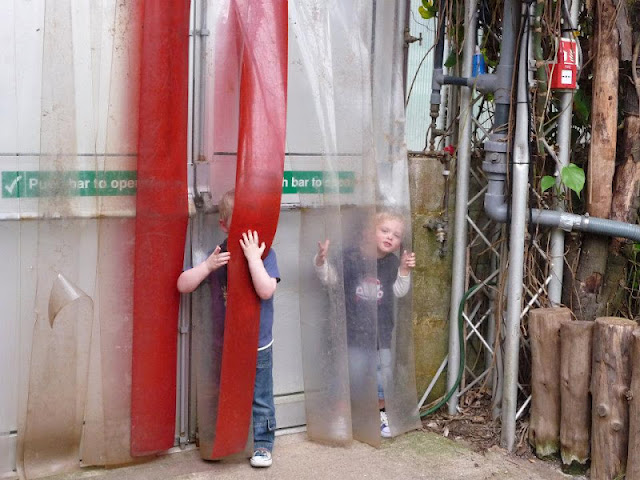 Jack and Ben are great pals and share their own definition of fun ie. hiding behind the grotty looking plastic door hangings (try not to think to much about what germs maybe clung onto those  strips) 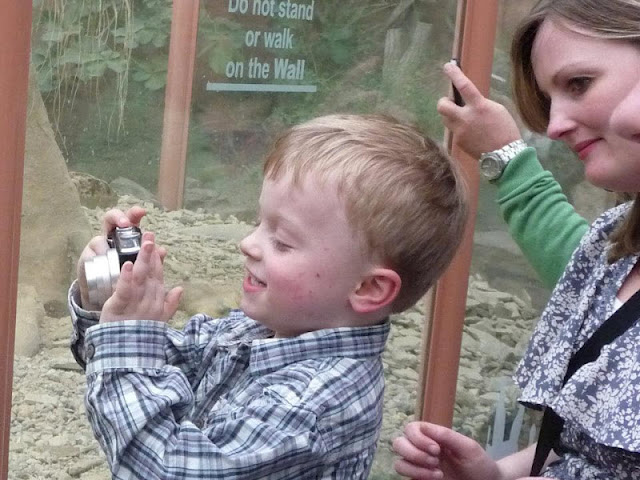 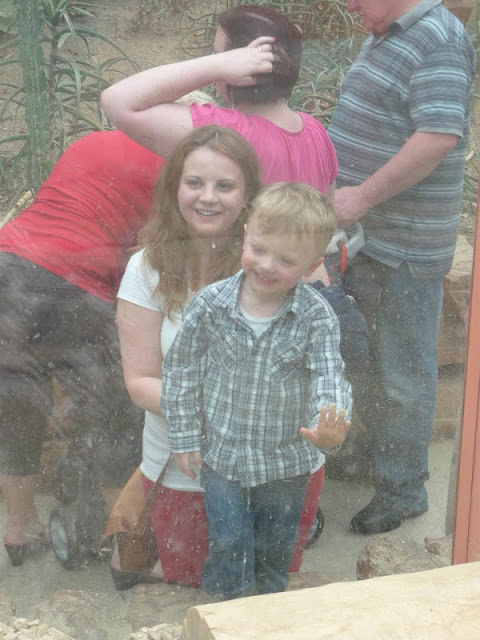 Outside and with a plastic crocodile each, the three boys raced around the privet lined flowerbeds repeatedly. Challenging different aunts and Uncles to compete. Grandad McNee also joined in with a special racing step. 'Again' squealed Ben 'Again'. We headed down to the park for cake and drink, though disaster occurred when it appeared that in the hurrah of being flung in the air by Grandad Mc and Uncle Tim, Joseph had lost his plastic crocodile. The pavements were trawled almost in police fashion but unfortunately the croc had gone. Over to Grandad Hillary to patiently look with him and then in the end go back and buy him a new one - trauma averted. 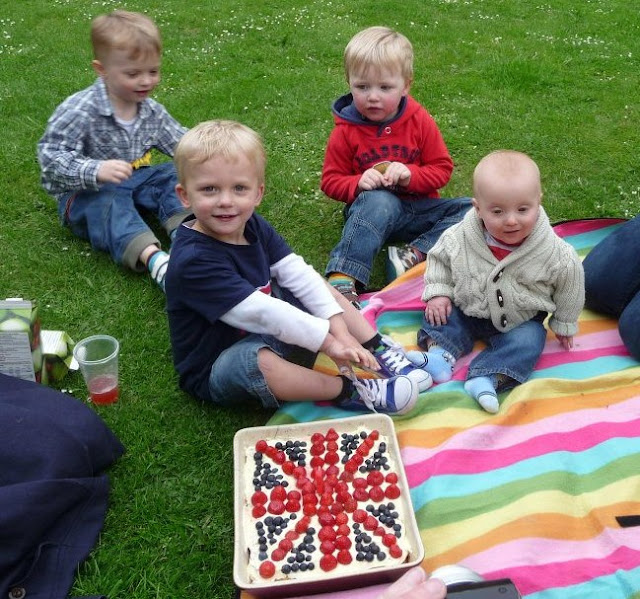 As his birthday was over the Queen's Jubilee weekend, I opted for a Jubilee themed cake. Though Nathan would have preferred the red and blue to have been made up of peanut M&Ms, the strawberries and blueberries went down well. 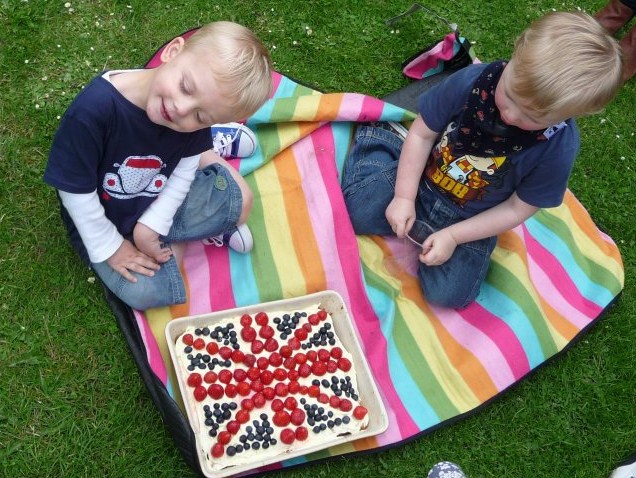 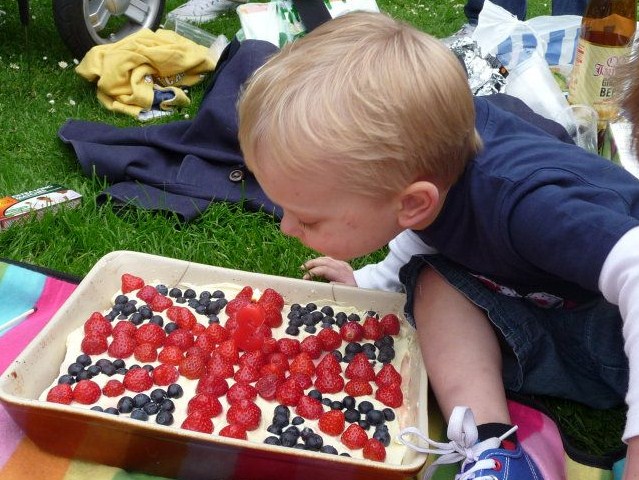 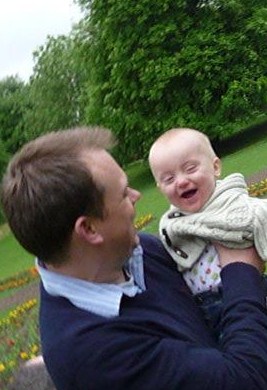 More racing around (and it has to be said sometimes through) flowerbeds, some diving on Aunty Alice and being weights for Uncle Josh who carried them two at a time like a 'world's strongest man' challenge, present opening and it was time to head home. 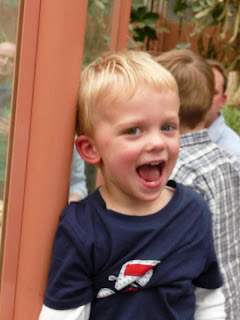 A lovely day, for our lovely boy.
Posted by Aimingforswanlike at 12:55