Finally getting to Mary's Farm

Yipee for May Bank holidays! I love May. The feeling of hope in the air for the adventures which will happen in the coming summer months.
We made the most of the bank holiday and finally got to go to the infamous Mary's Farm! Which comes with as high a recommendation as there can be from Gemma and Ben Adamson. We went and we know why!

Check out this morning view, for a start! 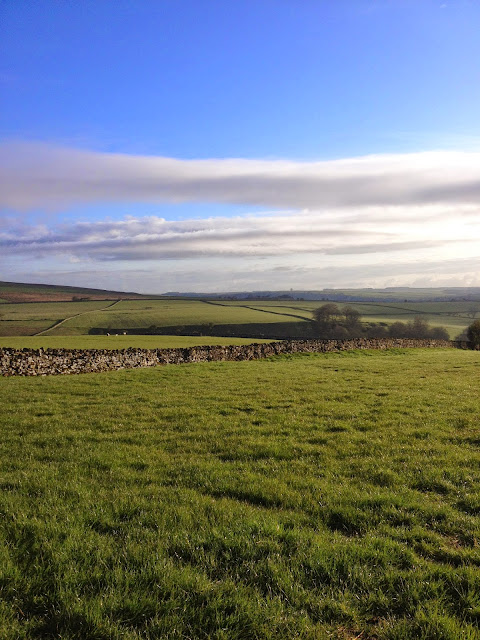 We arrived late, dusk had already fallen but our friends had taken up our tent early and put it up for us - fabulous. So we only then had to faff around with air mattresses and sleeping bags. The electric heater was a life saver as it was chilly to say the least. The children enjoyed playing in the dark with their friends and toasting marshmallows on Ben's washing machine drum turned fire pit  until bed time. Once settled, Nathan and I had our turn to chat around the fire. 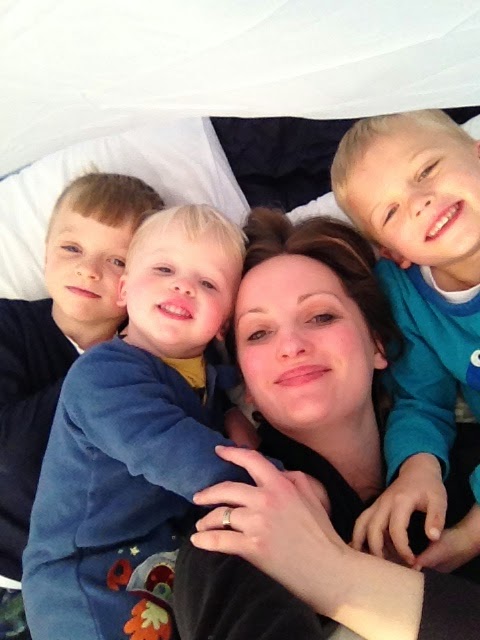 The sun woke us up at 6:30 and we looked like this!
Saturday morning was time for
kicking a football,
playing/arguing over the bow and arrow set Nathan bought for the boys (cough *himself) 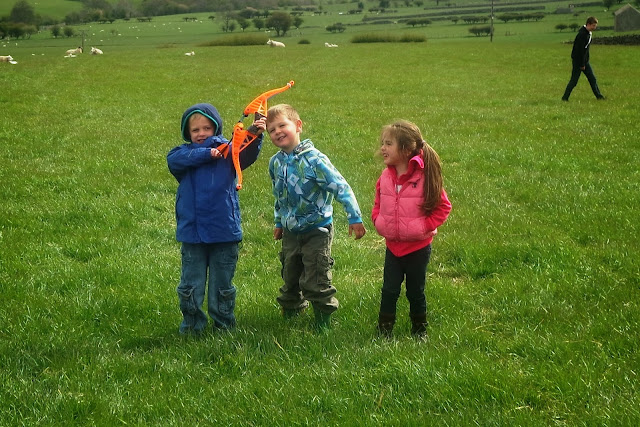 sitting in the comfort of Sharne's caravan and having 'caravan envy'
getting locked in the shower room, only to find out that the hole is so you can put your finger through to lift up the latch from the other side! (Oh and while we're on the subject of  'dumb things I do' you won't get the shower to work unless you pull the switch by the door - Sunday's findings!)
bacon sandwiches on the camp stove you have to borrow from dan & Nicola because our stove is missing its adaptor!
drizzle turning to that rain which soaks you through
reflecting on why we didn't bring wellies!
hanging out int the Adamson's camper van
Seth deciding that his favourite person of the weekend was going to be James. 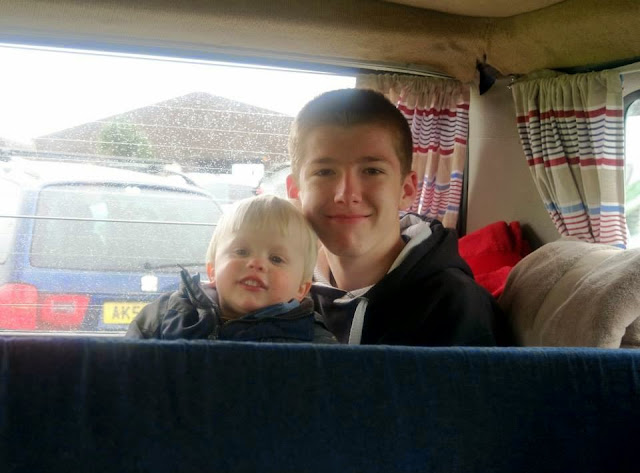 After midday as the rain really set in we, headed for Richmond to get some lunch and we'd heard that Her Majesty was in town! 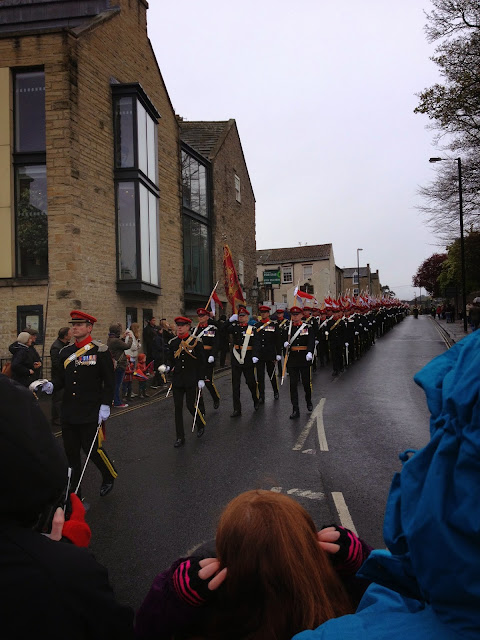 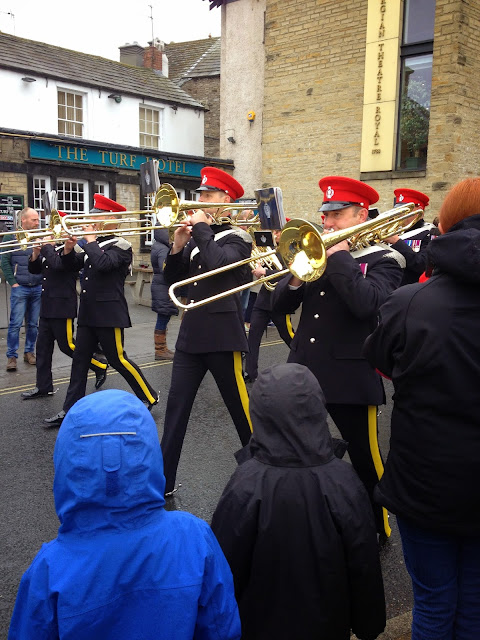 We watched the parade, though at the last minute it was decided that HRH  would arrive by helicopter as it was too cold for her to be out - too true! We wandered around lovely Richmond then took a long drive to find a supermarket which seemed like a waste of time but at least we were dry. Then returned to camp to make a standard camping tea of Stagg and rice! The boys and I then got the call from Mary,as in Mary from Mary's farm, to go and help bottle feed some lambs whose mothers had died ( we had to walk past one of said mothers on the way to the barn)

Ben in particular, loved it! 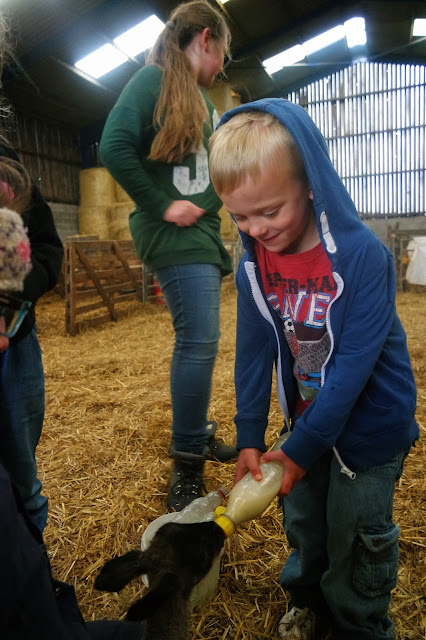 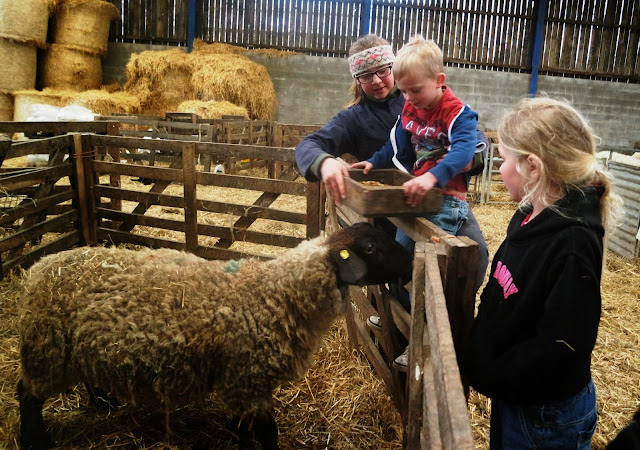 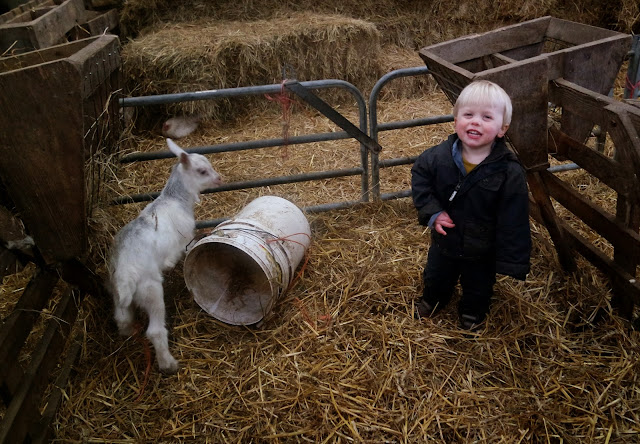 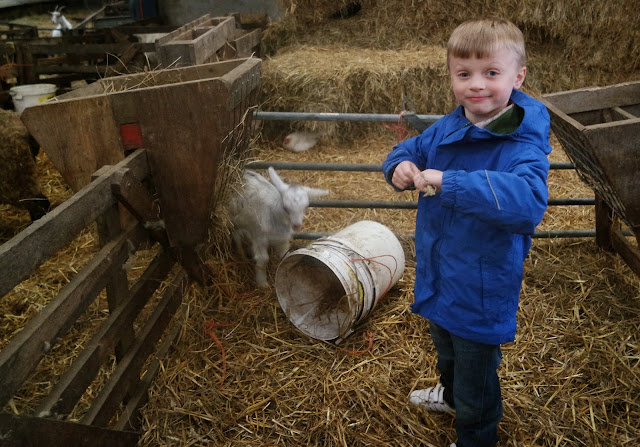 It wasn't a day with that much to report because of the weather but we made the most of it and the boys slept well and we once again enjoyed late night chats around the camp fire reeling of quotes from Adam Sandler movies.

We woke up and the view looked something like this! 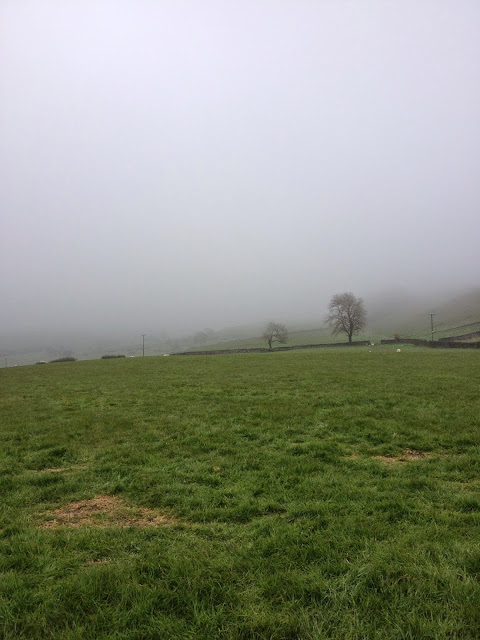 We set off for church, grateful to be in the warmth of the car for the 20 miles to Darlington. We arrived late, 20 minutes late. There were no seats at the back we could sneak into so we had to walk into seats in the middle of the chapel beyond a couple. Five minutes in, Seth who was at on my lap, threw up and continued to do so as I made a mad dash, past aforementioned couple and out of the chapel trying  to stop the spew from landing on the floor! 20 minutes later, we reappeared from the disabled toilets! Seth wearing Ben's hoody and I wearing a cardigan I fortuitously had in the car! Nathan was in corridor, speaking to a chap who fondly was reminiscing about the kindness Grandpa and Grandma had shown him as a lad. I joked (kind of) we should have kept quiet about who we were as not to bring down the name of 'McNee'

Does this face look like someone who feels sick? Nope I didn't think so! As soon a sthe deed was done he felt better. We think he'd had some sneaky sips of last night's hot chocolate in the morning. 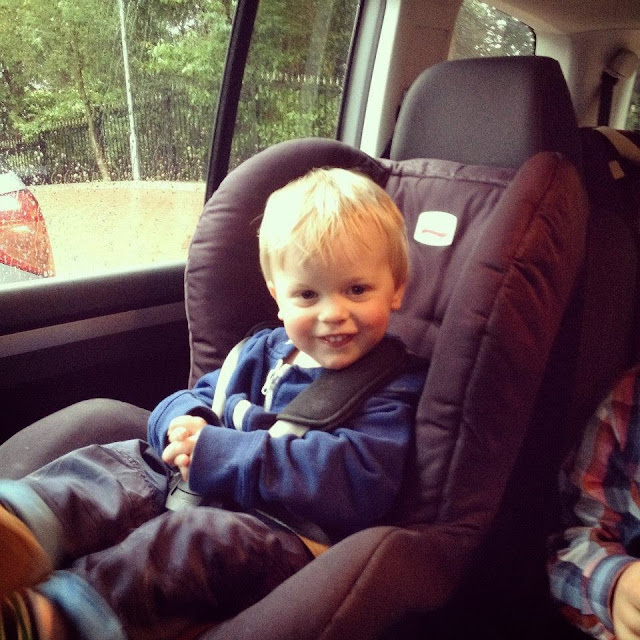 We then took a trip to Hurworth to try and find the house where Grandpa and Grandma used to live when Simon was a teenager.
12 Minister way.
Made the boys have a photo outside it, whilst Nathan worried about what the neighbors would think! 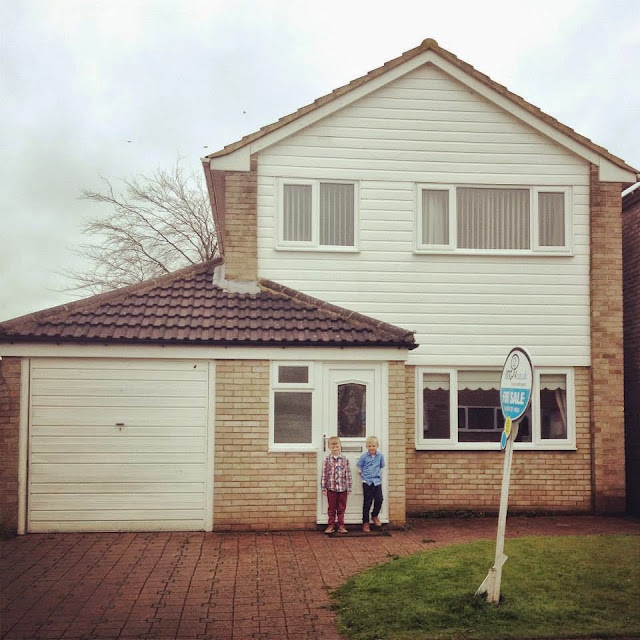 Back in the safety of the campsite there was time for - 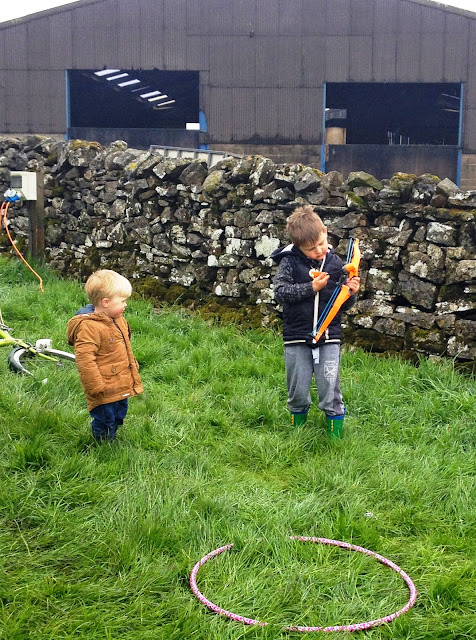 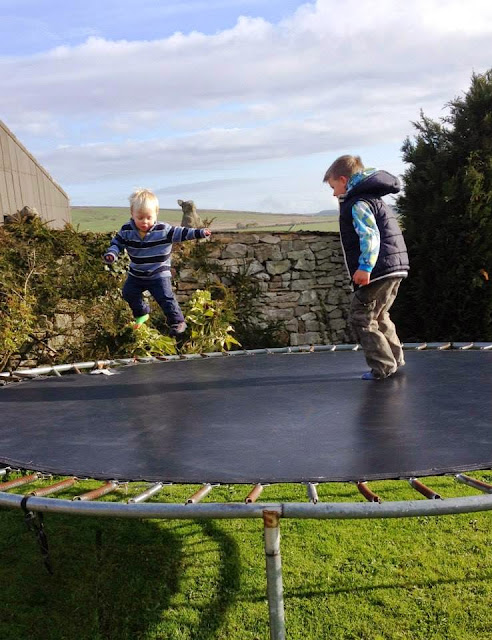 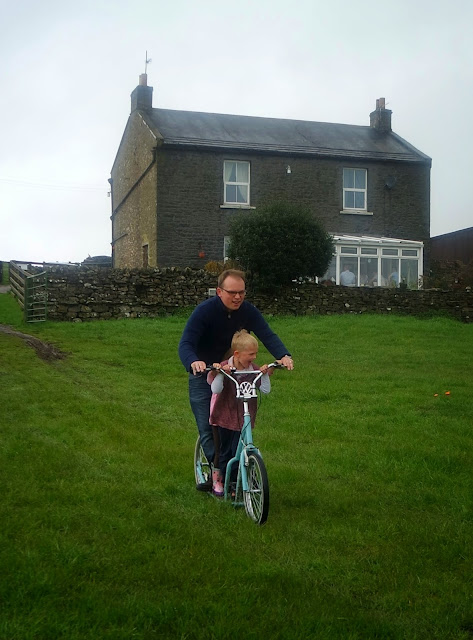 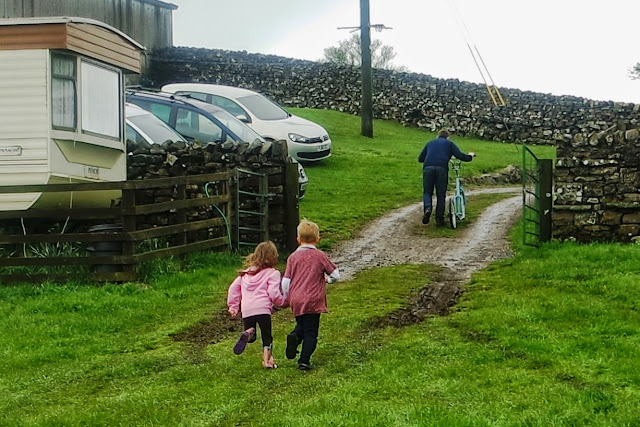 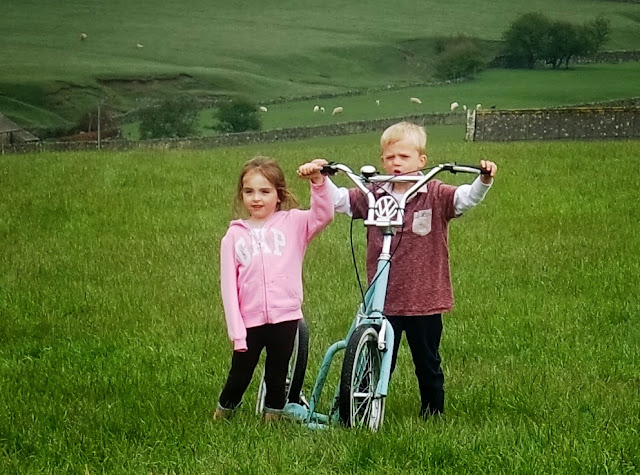 enjoying the sun return literally 10 minutes after the Grays left for home!

taking the dogs for a walk. 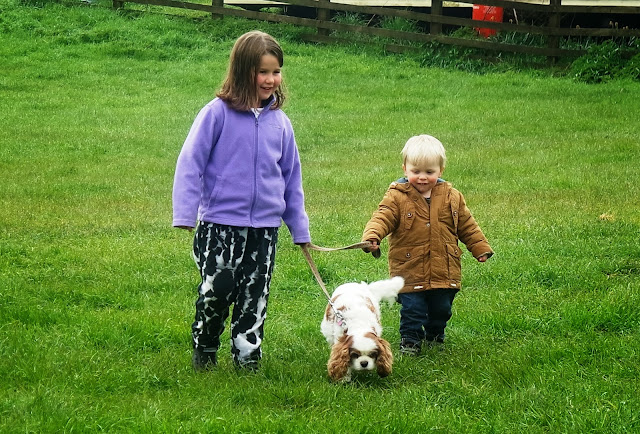 After we rolled out from dinner, we decided that to pack up and travel home that evening would be the more sensible idea as we were clean out of dry socks and Seth had worn the outfit he was supposed to wear for dad's party the next day. It was the right decision and we didn't leave the campsite until after nightfall at 9:30. 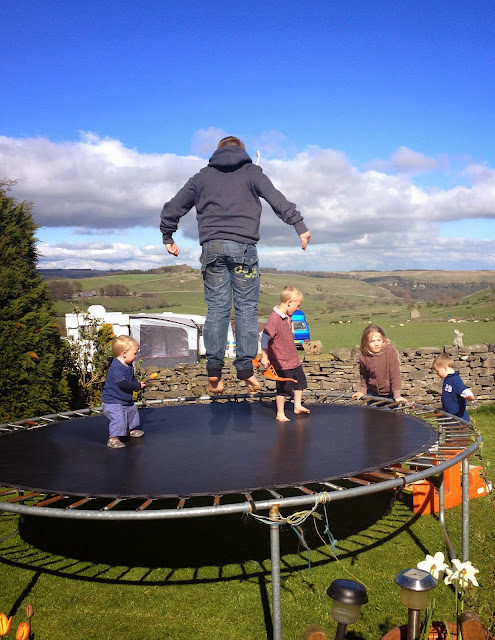 Then Farmer Keith came round with his quad tractor and sheep trailer looking for recruits to go and patrol the farm before  dusk. 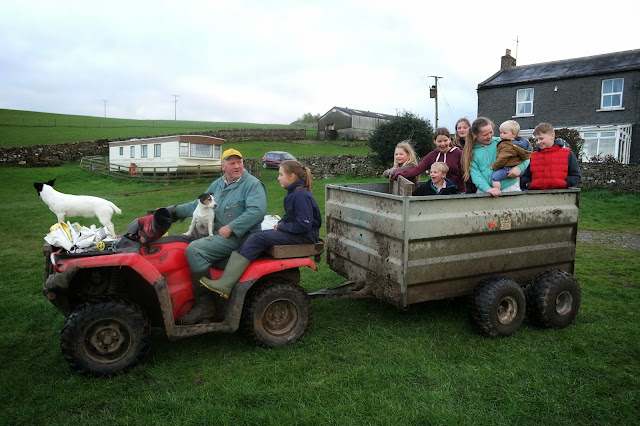 Only one person slipped over in the sheep trailer  as it was flung side to side ,and it wasn't a child (cough!) They did however, manage to land their bum in the middle of the trailer away from the piled sheep poo!

The kids loved it and I love Ben's face which showed him screaming with delight! 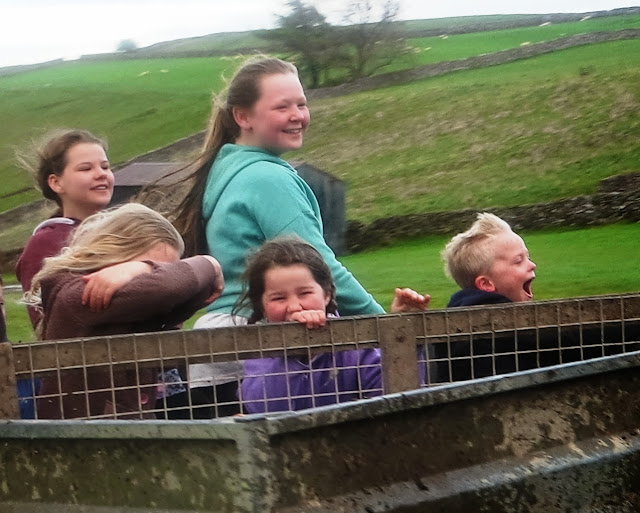 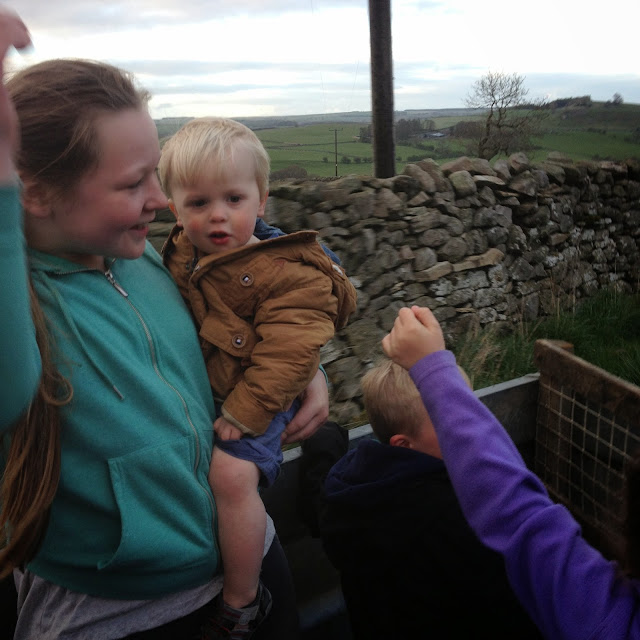 Afterwards the children went off to find the rabbit we'd observed the two Jack Russells in the distance had been fighting over. Mary was on hand to scoop up the deceased and take it to be enjoyed by the farm's ferrets. I actually enjoyed how the children weren't squeamish about this and just accepted that this was real life. 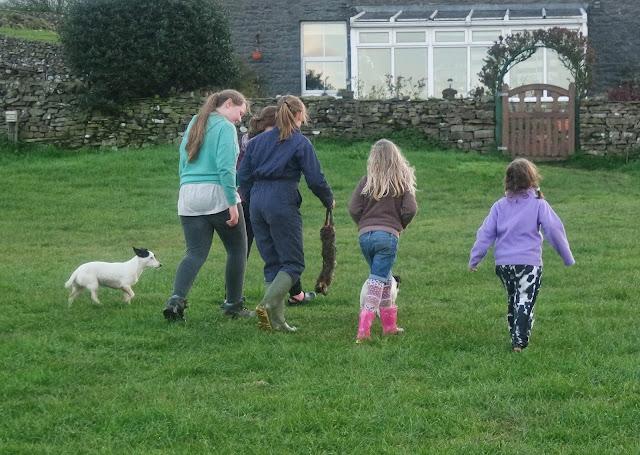 To be true, we'd had a great time inspite of the poor weather.
As I was retelling the tale of the trailer ride and my fall to the family the day after, someone remarked in jest 'sounds magical!'  But to be honest actually it was. It might sound trite, but really getting away to somewhere stunningly beautiful, with good friends, where you don't worry about the children making too much noise because they're having fun and making lots of memories is exactly that -  magical!

Email ThisBlogThis!Share to TwitterShare to FacebookShare to Pinterest
Labels: Family, Friends, Seth, Trips, why I blog