It's been a while and I have a number of mashed memories that I know I wanted to record days, maybe weeks ago.

Seth is now 6 months old!!!
At 24 weeks he started rolling over both ways and he's been on the move ever since. No more being left on the bed or sofa allowed (that is speaking from experience!)
He can commando crawl and does the rocking back n forth on his knees that Ben n Joseph did at a similar age. Put a ball in front of him and he goes after it with intent. In fact he loves to see what he can grab. His eyes widen and he lunges forth.
He likes to practise his pilates pushing up on his hands and toes!
Two weeks ago he had a couple of rough nights and one little bottom tooth poked through.
Weaning has begun (totally forgot how messy this stage was!!!) Before food passed his lips, Uncle David reckoned that he was 19 pounds heavier when holding Seth on the scales!! So far no food has been refused - baby rice, banana, carrot, butternut squash, toast, rice cakes, broccoli, apple, pear.
He's delish!

Nathan and I got to go out for a meal with Craig, Frances, Debs and Al before Craig and Frances left for a 5 year stint in China.
It;s just so nice to spend time with each other. It doesn't happen often enough however the lapse of time does not alter how comfortable we feel in their presence.
Although I am biased I think anyone would find it hard to argue against July 2002 being a fabulous month to get married.
Craig and Frances - 06/07/02
Alun and Deborah - 20/07/02
Nathan & Kathryn - 27/07/02 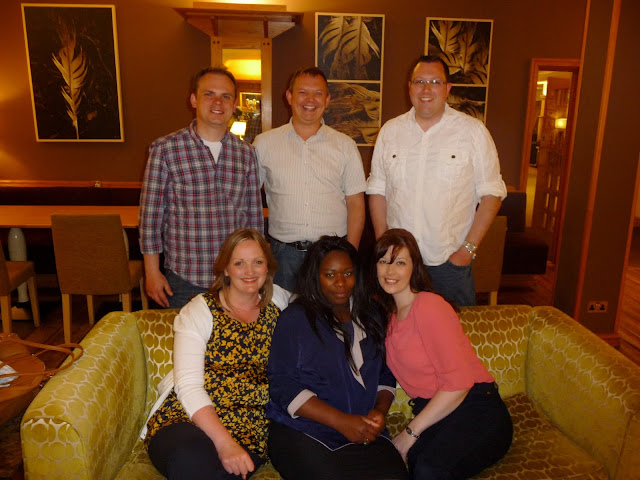 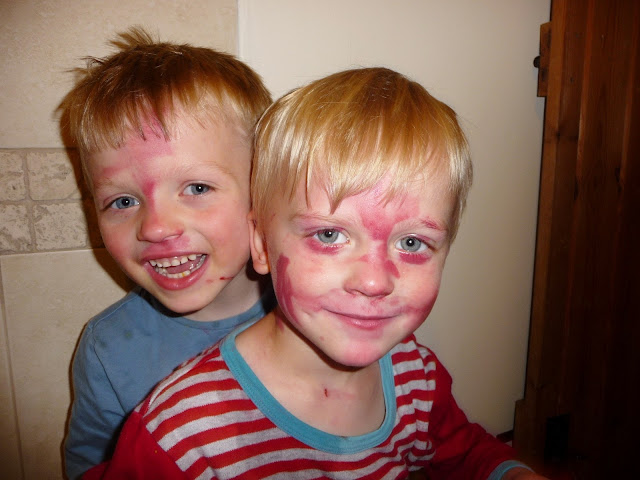 I love to hear them both pray. Ben currently loves to claim the right to bless food at nearly every opportunity. He buries his head into his folded arms and quietly prayers. We pick up on the odd word hear and there and then 'amen' ... sometimes we 'amen' too soon as we think he has finished only to be told ' I've NOT finished' so we repent and refold our arms and he continues or sometimes he starts again!
Joseph speaks to Heavenly Father like he's in the room having a conversation. He  speaks about things on his mind and gives thanks fro lovely days and asks for lovely days to come. He can flit from one thing to another for example the other day part of his prayer went - 'I love Jesus and I love fruit shoots..' This made me do an eyebrow raise! as I'm not sure where the fruit shoot thing came from lol! (The boy aint allowed fruit shoots as they send him loopy especially the blackcurrant one!)

Crazy day - 27/6
On the way to taking Ben to Rhiannon's for the afternoon. I gasped as I remembered I had a dentist apt booked for the afternoon. I had almost forgotten all about it and felt relief that it had come to my mind. Seconds later I gasped again as I realised that I'd actually forgotten Ben's speech therapy apt that morning! I hate it when my mental memory starts to break down it makes me feel like I'm loosing it. Rang Nathan and being a wimp asked him to ring the speech therapist as I didn't want to get told off!!! Crazy afternoon running here n there.. dashed to my dentist appointment... a few searches later the receptionist politely smiled and informed me 'your appointment was actually yesterday!'.......hangs head in shame!

Crazy night -  1/7
At 10pm, Joseph was sick! Tonnes of the stuff! All over! Even all over Ben who was not roused by it - gross! I think he'd overdosed on watermelon.. it certainly looked that way and he was totally fine afterwards! Talk about brotherly love; Ben insisted on joining Joseph in the poorly bed we made on our bedroom floor.
3am - I wake up yelping/screaming.. my back had seized and I couldn't move without serious shooting pain (as bad as labour , no joke). I was frozen on the edge of the bed, scared to move for a good while. Nathan went to locate his oil to give me a healing blessing. Joseph unaware of Nathan's intent called out to him  "Dad just give Mum a blessing!" Love his faith.
I manage to move very gingerly. Nathan gave me a blessing. As Joseph had been sick it meant that for the next couple of days whilst I was still very sore and stiff I didn't have to do the school runs - tender mercies.